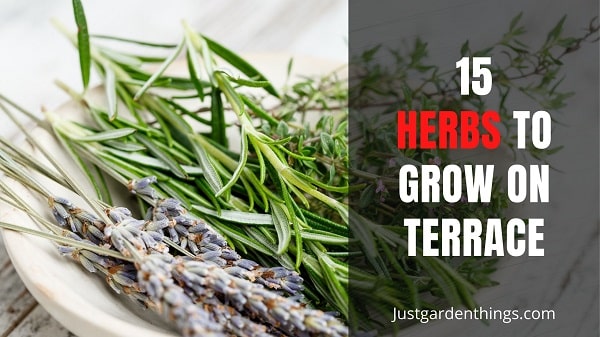 In this modern epoch, people’s life is full of stress and tiredness due to an unhealthy and polluted environment. People often get sick due to so and indulge themselves in consuming products that are instant-effective but cause too much harm to their body.


Lack of awareness amongst people about the same makes daily life stressful. There are many other ways to stay fit & fine, even in this kind of atmosphere. One of them is “herbs”.


As stated by its meaning in Hindi language (Jadi-booti), herbs are those groups of plants that are medicinal and have the power to treat almost every kind of ailment, not instantly but effectively from root-cause without causing any single side-effect.


Herbs are much better than so-called “instant-effecting” products that lead to so many side effects causing harm to the body in long run. Some of these herbs are discussed in this post.

15 Herbs That Can Be Grown on Terrace

We only need some basic equipment to grow these herbs. it only requires a little bit of scientific knowledge that is easily available on the internet. It doesn’t require large space on the terrace, most of these herbs can be planted in pots also.

Tulsi, also known as “Ocimum tenuiflorum” & “Ocimum sanctum” biologically & “Holy Basil”, is the most used medicinal plant in our country, India. It is the most familiar herb used to cure so many diseases such as cough, cold, and many more.


It is often used in tea in India, as suggested by our grandparents, both for taste and for curing common diseases as mentioned above. It is also a very effective remedy for headaches that occur sometimes due to pressure of work, stress, and some other reasons.


Consuming Tulsi on a daily basis increases the immunity of the body. In India, it is also used for worship purposes and considered as a “holy plant”. It can be given the name of “natural immunity booster” as it has many anti-cancer properties, useful in kidney stones, is effective for those suffering from diabetes, regulates blood pressure, and is good for the heart also.

Aloe vera, also known as “Aloe barbadensis miller” botanically is also one of the most commonly used herbs for medicinal purposes. Talking about its structure, it contains jelly-like substances inside its leafy-shaped body. Aside from being used as a medicinal plant, it is edible also and can cure different abdominal ailments.


There are more than 500 different species of Aloe Vera found all over the world. It has many anti-oxidant properties also which lowers stress on the body and reduces the risk of chronic diseases. It is also recommended by many great saints of India to consume Aloe Vera for the strong immunity of the body.


Most significantly, it is a skin specialist medicinal plant that is used as a remedy for different skin diseases. It had the power to cure pimples, acne, and other different kinds of spots on the skin, that occur due to teenage or some other reasons, without causing any side effects on the skin.


It is also very effective for hairs as it provides nourishment to them and strength to the scalp which leads to strong, long, and healthy hairs decreasing hair fall and dandruff problems. It had moisturizing properties also. It can also cure burns, cuts and heal wounds.

Mint, also known as “Mentha” scientifically, is a natural herb that is cool and refreshing. Its leaves have many useful properties. As being cold, it can be used as a remedy in curing throat problems. It can also be used as the “water purifier” to make the throat free from many disease-causing microbes.


It is used in many beverages also to make them refreshing and to get rid of digestive problems. It refreshes the mind, helps relieve indigestion, and decreases breastfeeding pain.

Coriander, also known as “Coriandrum Sativum” scientifically and “dhaniya” in Hindi language is also one of the plants which is used in different manners. It is also a familiar one.


Dry coriander is used as a spice during cooking and its green leaves are used in garnishing over the dishes for making them look better and making them tastier. Coriander seeds have detoxicating properties which can cure urinary diseases.

Clove, also known as “Syzygium Aromaticum” scientifically, is a small bud with a soothing aroma. It is also most commonly used in kitchens for cooking purposes which provides a tempering to the food to make it tastier. Clove oil is a medication used in different therapies and medicines due to its anti-oxidant properties. It has the power to cure many oral problems such as ulcers and dental pain.

Turmeric, also known as “Curcuma Louga” scientifically, is also a naturally occurring plant having many edible and medicinal properties. Almost everyone is familiar with this name but very few people would have known that being a cooking material, it works as a herb also. It is also used as a medicine.


It is a basic substance having a pH of 7.4. It is also used as an acid-base indicator in chemistry to check whether a given substance is acidic or basic. It contains a chemical called “curcumin” which remains yellow in acidic or neutral solution and turns red in a basic solution. In cooking, it is basically used to provide a yellow color for preparing the edges and to give a tempering to the food. It helps to recover from physical body pain. It is also consumed as medicine by adding in milk which is very helpful in healing wounds. It also reduces the risk of heart attack and paralysis.

Ginger, also known as “Ginger Officinale” scientifically is also one of the most commonly used plants for cooking purposes. It has a somewhat bitter taste but many useful properties. Its roots are very effective in treating throat problems, that’s why it’s often used in making tea which provides a good taste also. It cures sore throat, cold, cough, nausea, and many stomach problems.

Garlic, also known as “Zingiber officinale” scientifically, is also one of the most commonly used plants having many medicinal properties also in addition to cooking properties. It has many useful properties like maintaining the blood pressure of the body and boosting testosterone hormone levels in the body for preventing sexual health issues. It is also used to provide aroma to dishes during cooking.

Fenugreek is also known as “Trigonella Foecum Graecum” scientifically. Fenugreek leaves are the main ingredients of a specific Indian dish. Its seeds are also used as a spice to give pleasant and tempting flavor. Consuming fenugreek by females can increase their external beauty and can reduce extra fat also.

Lemon balm is also known as “Melissa Officinalis” scientifically.Lemon Balm’s leaves are used as tea ingredients in different regions of our country.It’s the home remedy for gastric problems.It helps to reduce weight if taken regularly with warm water.

Lavender, also known as “Lavandula” scientifically, is a herb with a soothing aroma that reduces mental disorders and makes our body and mind relax. It is used in holy sticks to enhance positivity in a home environment. Many companies use it in their beauty products such as perfumes, soaps, and many others.

Rosemary is also known as “Rosmarinus Officinalis” scientifically. It is primarily used for fragrance and is also used to cure some skin disorders. It enhances the level of Keratin which helps in hair growth.

Oregano is also known as “Origanum Vulgare” scientifically. It belongs to the family of mint. It has a mild bitter taste which is used to make different fast foods tastier mostly pizzas. Oregano oil is used in medicines also.

Ajwain is also known as “Trachysperm Ammi” scientifically. It is a herb that can be found almost in every kitchen and is used for cooking. It is also used in many tonics that treats gastric problem mostly for acidity

Black pepper is also known as “Piper nigrum” scientifically. It is a small round black color fruit with a lot of remedies. It is mainly used to cure sore throat and tonsils. It prevents our body from bad cholesterol and is also used as a spice to enhance taste and aroma.


There is an ancient proverb “As you sow, so shall you reap” which means you always ensure to sow the best quality seed. Sunlight plays a major role in growth so it is necessary to provide proper sunlight and water to the plant. Timely watering and caring can increase your productivity to the next level.