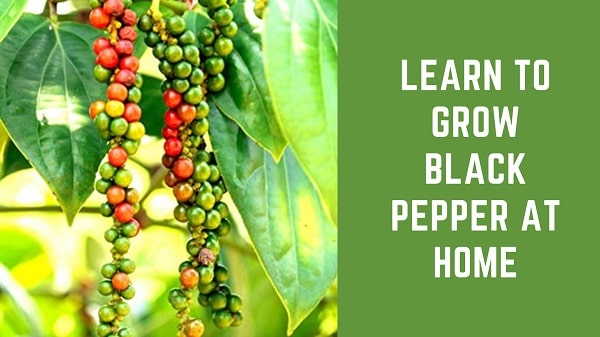 Our country, India is considered the hub of “spices” all over the world. Many spices are grown annually which are used for providing a tempting taste to our food. Apart from this, many spices play the role of herbs by providing immunity to the body & curing many common ailments.


One of them is “BLACK PEPPER” which is not only used as a spice to improve the taste of the food but also works as a herb to provide immunity to the body for fighting any kind of disease-causing microbes.

Black Pepper, commonly known as “peppercorns” & scientifically known as “Piper Nigrum” is a spice most commonly used, not only in India but all over the world.

Black Pepper is one of those spices/herbs that can be grown from seeds. It can be grown both in small pots and spacious gardens. Being a tropical plant It is mostly grown in southern India as it requires moderate sunlight. In case of too much hot, plants are protected from the hot sun by providing shade to them artificially.

During the summer months, it can be grown outside in open areas but during winters, it is kept inside otherwise moisture can lead to the destruction of the plant. It requires an optimum temperature of 20° C for proper growth but at a maximum level,25° C is the most perfect temperature for its growth if sometimes temperature gets increased, it can bear up to 40° C.

It can’t bear frost at all, that’s why during winters, it is grown in containers or pots. In areas with very high temperatures, the greenhouse effect is followed for providing filtered sunlight and proper nourishment to the plant.

Talking about its soil requirements for appropriate growth, it can be grown in clay soil, red soil & sandy soil. Besides this, for the best growth of black pepper, the humus content in the soil should be well-desired & rich in all necessary nutrients. The soil should be a little acidic with a pH level of up to 5.0 to 6.5.

The compost to be used in pots for growing black pepper has to be prepared by mixing thoroughly rotten cow dung with the soil in a 1:3 ratio. Then, seeds are sown very tightly below the soil and at some distance of about 3 inches from each other.


Then, over this mixture, a narrow & thin layer of mulch, straw & grass is spread. Then,the soil is watered deeply to make it moist. For adequate germination of seeds, the optimum soil temperature is 21° C.


There are different types of peppercorns seeds available such as red, black & white. Each has its own germination time span. Depending on the seed quality & growing condition, seeds get germinated I’m 30-40 days. Overhead shade is provided to them to protect the newly growing seedlings from the bright sun.

On the hills, black pepper is grown where they are elevated 800-1500 meters above sea level and is grown in the shades of beverages such as tea & coffee. Basically, it needs at least 5-6 hours to be kept in the partial shade of these plantations for proper growth.

1. Always go with fresh seeds at the growing time as these are feasible for a very short duration.

2. Do not plant the black pepper that is available in the grocery stores as it may be dried & would not germinate properly on time for providing a good yield & can’t be stored.

Similar to other plants, black pepper plants also develop flowers that provide beauty to the plant. During its initial growth, very tiny white flowers grow on the plant which forms pendulous shaped spikes and results in small, round & green peppercorns in the form of chains that turn red after full growth.


In winters, the growth of the plants gets slow a little bit, but flowering & fruiting is perennial. It starts flowering when it’s about to begin producing the peppers which have to be used ahead for different purposes and if in case, the plant is flowering but not producing fruit, it might require help with pollination.

While observing the Pepper’s plant leaves closely, one may find some black spots. No need to fear them as they are totally normal. Those black spots are actually small crystalline balls that are having sugars inside them & scientifically they are known as “exudates”.


In the initial stage, they aren’t black in color but as the plant starts doing growth, they turn darkish black. Sometimes, people consider them insects and get afraid, but it isn’t the actual case.


They are simply natural balls. One shouldn’t try to remove them by getting afraid or something else as the plant isn’t getting affected by them and they are totally well for it.

How to Grow Kiwi Berries from Seeds?

How to Grow Chia Seeds at home?

To obtain a good yield, fertilization has to be proper. For black pepper, fertilizer to be used depends on the soil. But it should be in a balanced form as excessive use of fertilizers can be toxic & can make the harvest unusable.


Originally, there are two ways to fertilize the pepper plant either organic fertilizer (having vegetable & fruits waste) can be used or liquid fertilizer can be used.

While growing in small pots, less fertilizer is to be used & in a spacious area, its quantity can be taken a little more.Keep in mind, the availability of temperature is directly proportional to the use of fertilizers. In high-temperature increase, the quantity of fertilizer & in low temperature decreases their quantity.

Insects & pests are very common during the growth of any plant. Black pepper plant also suffers from so. To prevent them from causing harm to the harvest, the soil should not be tilted unnecessarily, be provided with proper nutrients at the time of fertilizing & pesticides or insecticides can be used.


Weeds should be pulled out before flowering by the most common method of hand-picking. This would for sure result in a good quality yield of Black pepper.