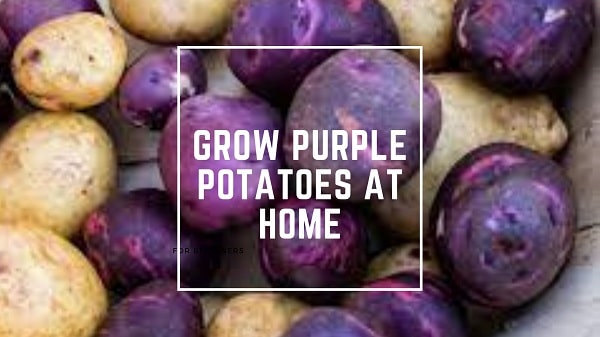 Potatoes are the perfect crop for container growing. They can be grown in just about any type of container, with the exception of an open-topped basket, which can dry out too quickly.

Choose a container with adequate drainage holes. A good rule of thumb is one hole per gallon of soil in the pot. If your pot has few or no holes, you can drill your own, or add stones to the bottom to promote drainage.

Fill with a quality potting mix. Potting mixes are generally lighter and more moisture-retentive than garden soils, making them ideal for growing potatoes in containers. Make sure to add plenty of compost, but don’t use fresh manure unless it’s been composted first.

Potatoes are easy to grow, but they do require a lot of space to grow in. A single potato plant will grow into a large bush with many tubers at the end of the season. Potatoes need moist soil, so watering is important.

The best time to plant potatoes is in late March or early April. You can buy seed potatoes from garden centers or order them through mail-order catalogs. Potatoes are ready to harvest in mid-summer after the foliage has died back. The tubers will be ready for harvest once the plants have died and turned yellow or brown.

Potatoes are a cool-season crop that produces best when daytime highs are between 60 and 70 degrees Fahrenheit and nighttime lows are between 45 and 55 degrees F. At temperatures above 80 degrees F, potato tubers stop forming. Early potatoes are typically planted about two weeks before the last spring frost date for your area.

Purple potatoes sometimes referred to as blue potatoes, are an unusual potato variety that has a deep purple or blue-purple skin and flesh. Though they are most often used in specialty dishes, these potatoes can be cooked and prepared in the same manner as any other potato.

Purple Peruvian potatoes are native to South America, where they have been cultivated for hundreds of years. They were brought to the United States by European explorers and settlers. The small, round tubers have a thin, dark purple skin with light tan spots. The flesh is a medium blue color and has a firm texture. Purple Peruvian potatoes have a mild, earthy flavor and are particularly well suited for roasting or mashing.

These potatoes have dark purple skin with heavy spotting and deeply purple flesh. The large tubers are oblong in shape and have a similar taste and texture to russet potatoes. These versatile potatoes can be baked, mashed, or roasted to create a wide variety of dishes. As the flesh retains its deep purple color after cooking, these potatoes are becoming increasingly popular among chefs who serve them in salads, appetizers, or side dishes for their striking appearance.

Purple Peruvian potatoes are a bit larger than baby purple potatoes and have a waxy texture. They hold their shape well when cooked so they are great to use in potato salads or soups.


Purple Peruvian potatoes have a nutty flavor and pair well with fish and poultry dishes. They are also good when baked or fried with seasonings such as oregano, marjoram, basil, and sage.

At the beginning of the 20th century, purple potatoes were grown in Scotland and Ireland. They were highly prized by locals who knew them to be delicious and nutritious, but that all changed when the Great Famine hit. People had to eat whatever they could find, so they ate all the purple potatoes first, leaving only white ones to plant for future crops. Now, more than a hundred years later, many people have forgotten about purple potatoes entirely.

Today, farmers in Scotland and Ireland are trying to restore the purple potato. They are working with scientists at an agricultural research center in Edinburgh who has discovered a gene that controls the color of potatoes and are using it to bring back the old variety.


The old purple potato was highly nutritious because it contains high levels of anthocyanin, a powerful antioxidant that may reduce cancer risk and slow aging–so scientists think this gene-manipulated potato could be a health food of the future.

Harvesting purple potatoes is also a lot easier than harvesting other vegetables, even other root vegetables like carrots. The big difference is that carrots grow underground and you can’t see them. With purple potatoes, you can see them right on top of the ground. They’re easy to spot.

But if you want to make sure all your purple potatoes grow big and strong, you need to plant them in rich soil with lots of fertilizer and water them every day. You also need to be patient, because it can take up to 4 months for the plants to start growing their first potatoes. After that, though, they will have new potatoes every 2 weeks for another 4 months or so.

How to Grow Kale in container at Home.

How to Grow Grapes in Container at home.

How to grow lemongrass in container.

Purple potatoes contain powerful antioxidants that protect the body from free radicals and may help reduce the risk of heart disease, cancer, and other diseases.

These antioxidants are called anthocyanins, which are powerful phytonutrients that give blueberries, blackberries, and other purple fruits and vegetables their dark colors.

Purple potatoes also contain other important nutrients like vitamin B6, potassium, vitamin C, and iron that benefit your health.

Purple potato is a high starch potato that is packed with anthocyanins which give the potato its distinctive purple skin and flesh. The purple potato contains flavonoids, which are antioxidants that fight free radicals in the body.


Free radicals are responsible for signs of aging such as wrinkles and age spots. The purple potato also has a lower glycemic index than regular potatoes, making it a healthy alternative for diabetics