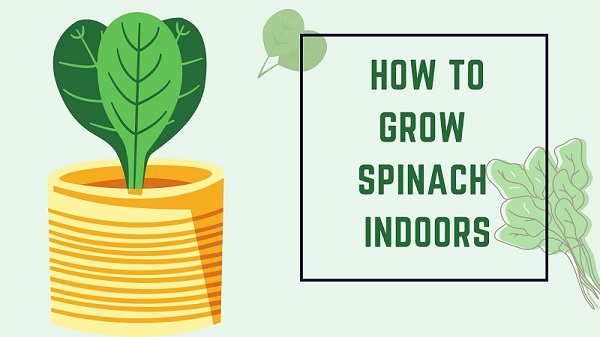 If you want to make your salad green then Spinach is one of those things which you surely have to include. But there are many problems which you might face having spinach available.


Technological advancement has helped us to plant spinach or other vegetables at any time during the year. Let us have a look at how you can grow spinach indoors without any issues.

However, it is recommended to grow Spinach in grow bags which are also most used while growing plants indoors. Moreover, these plants are affordable and also they are environment friendly.


This is the only reason why people mostly prefer using these containers to grow spinach or any other type of veggies indoors. Grow bags are also of two types. It can be either biodegradable or non-degradable.


It is strongly recommended to use non-degradable bags as they can be used multiple times. Raised bags can also be used as they act as a great substitute for Grow bags.

The next thing which is of utmost importance while growing spinach at home is the preparation of soil. But before that, it is important to know which soil would be most suitable for growing spinach indoors.


There are a few cases in which the soil depends upon the type of pots chosen to grow spinach. For example, if you have chosen grow bags or pots, then you should not use the topsoil of the garden to grow Spinach.


Even if you are growing spinach outdoors in pots or even in your garden, you should make sure that you won’t use the topsoil as it is not good for growth.

The spinach plant requires a lot of nutrients which can be mostly acquired by the soil which we use. Unfortunately, the topsoil of the garden is not having enough nutrients through which we can grow spinach indoors.


But, now the question comes, which soil should we use in order to grow the best spinach at home? The answer to the same is Potting soil. As the name suggests, this soil has been made specially to grow plants inside containers or pots.


Along with that, this soil is enough to give nutrients to the spinach for many months. This soil won’t be much costly if you buy it in bulk.

The only thing which leads to bad yield is the spacing problem. Many people who grow vegetables in their homes have no knowledge about the spacing which they have to give to the vegetables in order to make them grow in a nice way. The space which needs to be given between each plant depends on the variety of plants which you have chosen.

However, it is recommended to have at least 3 inches of space in order to let the spinach grow easily and without any issues.

In case the variety which you have chosen produces big leaves, then it is recommended to have a space of at least 5 inches between each of these plants. Another type of spinach that people like to grow is baby spinach.

How to grow mushrooms indoor

How to grow fig tree indoor

Many people have issues with space while growing vegetables in their homes. Along with that, they get worried that their plants won’t be able to grow up to their expectations.


However, this problem can also be easily solved. So, pruning is the one and only solution to this problem through which the spinach can be grown without any issues with the spacing care.

With the help of pruning shears, you will be able to harvest the leaves before they turn bitter in taste. The leaves start turning bitter in taste when they start producing yellow and also green flowers.

The main thing which people should be keeping in their minds is the right time at which they should harvest the spinach plant. The time of harvesting spinach plants typically depends on the type of spinach plant which you have chosen.


Along with that, the harvesting time also depends on whether the person wants to have baby spinach or full-grown spinach leaves.


On average, the spinach takes around 25 to 45 days of time to grow at its best level and be ready for the harvest. It is always recommended to harvest the outer leaves of the plants. The reason behind the same is that the inner leaves would be then able to get ready for the next harvest.